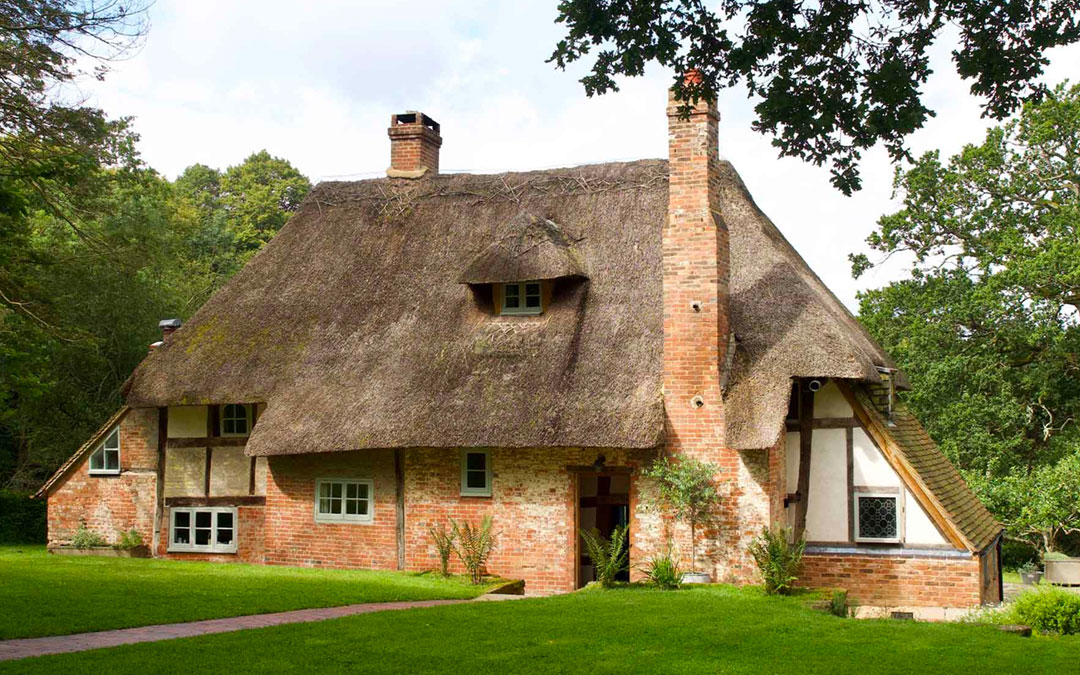 When Effie Gibson and Darren Phizacklea first came across the Forest House, it was in a very sorry state indeed. This late 16th / early 17th Century timber-framed, thatched house had belonged to part of a wider family estate, but hadn’t been lived in for around 25 years. It was, for the most part, structurally sound – but there were ferns growing in the living room, the downstairs bathroom wall had partially collapsed. It was clear that much of the smaller local wildlife had been calling it home for some time!

Given the state of the property, the challenge of renovating the house may have proved daunting for some, but Effie & Phiz could immediately see the charm and its potential: ‘It looked like the sort of house you might expect to come across in a fairytale…it had a kind of magical, otherworldly feel to it’. The advantage of the house having remained untouched for many years, was that there were some incredible original features still intact, such as the oak floorboards, beams, inglenook fireplaces, and beautiful stained-glass windows. 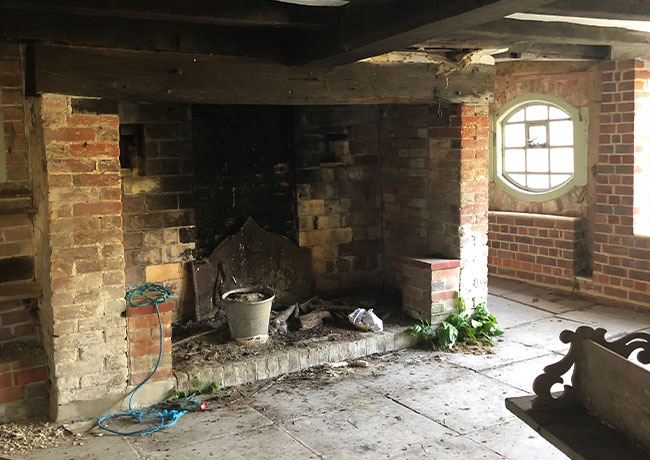 (The inglenook fireplace in the sitting room, complete with ferns!)

So began a two-year process of renovation, starting with the less-than-glamorous task of improving the drainage around the property – to encourage water away from the house and allow them to start to reinstate crumbling walls and ceilings.

It was during the course of the renovation work that the couple got to know their neighbour, Albert, who proved to be a fantastic source of knowledge on the history and previous occupants of the Forest House:

‘Albert had lived and worked on the local estate his whole life. When he first visited the house as a boy, in the 1940’s, it was split into two residences. A family of seven lived in one side and an old man who everyone called Uncle George, lived in the other half.

Uncle George was quite a character by all accounts. He smoked a clay pipe, made his own homemade wine and smoked his own hams. Albert often remembers seeing a huge leg of pork hanging up above the fire in the big inglenook chimney. The water supply at that time came from the well nearby. Albert can remember how pure the water from it tasted.’

Later the house was rented as a weekend retreat by journalist Mary Goldring (who became aviation correspondent for the Economist). She converted the two houses into one, connected it to mains water, and added a bathroom. She used to come down from London with her pet ferrets every Friday, and was well known and liked locally – particularly by the estate gamekeepers and staff, who would call in to see her for a chat and large tumbler of whisky!

Effie & Phiz tackled the project management themselves, and took a very ‘hands on’ approach, which helped to keep costs down, as well as making sure that everything was done to their very exacting standards. Where possible, they used local tradesmen and craftsmen, many of whom had always known the house and were therefore sympathetic to it – which is perhaps why the standard of their work was so good: ‘We were extremely pleased with the team that we had working with us and we were impressed by the quality of their workmanship’, Effie says. 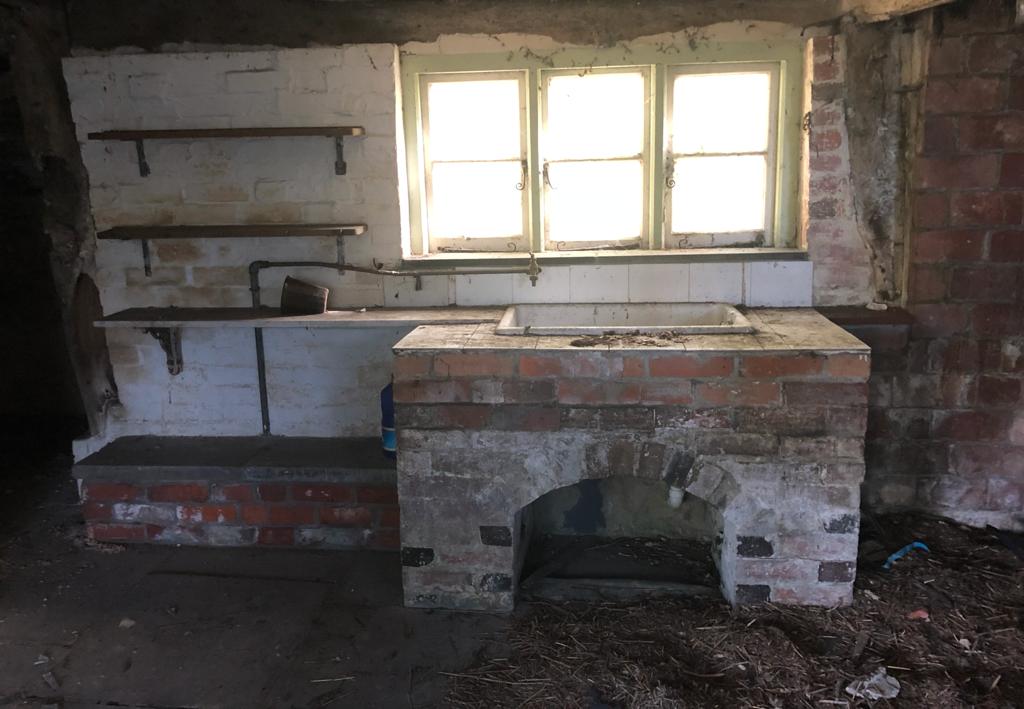 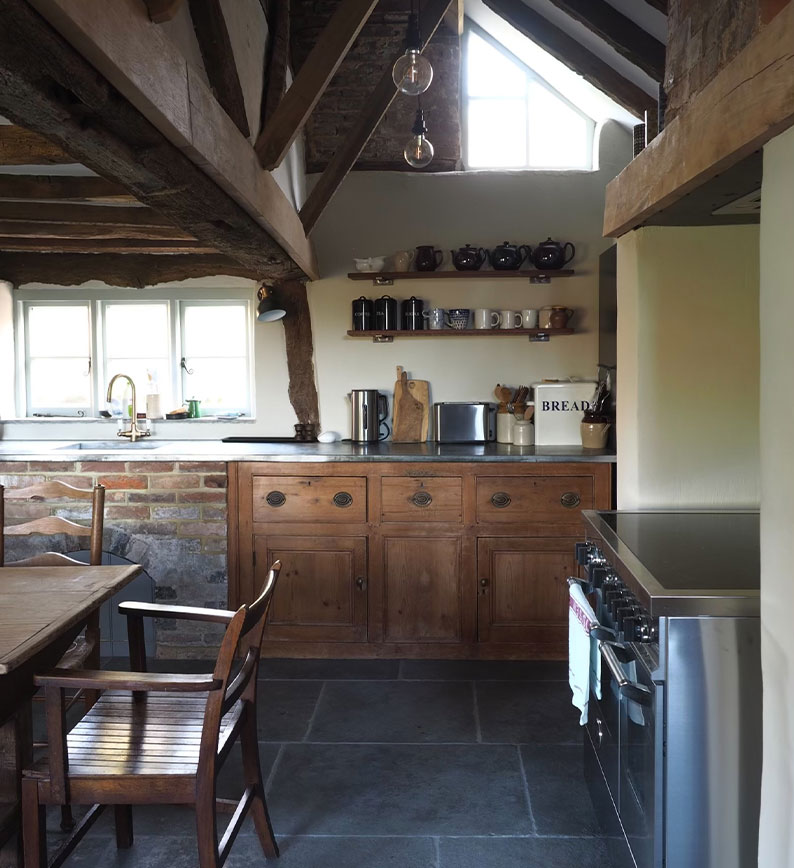 (The kitchen, before and after transformation)

Through the process of bringing the house back to life, there have been some wonderful surprises; the 1960’s bricks that had been added to the back of the inglenook fireplace in the kitchen concealed an original sandstone wall, which has now been re-limewashed, and forms the perfect backdrop to a modern range cooker. The original well that provided Albert’s pure tasting waster was also rediscovered, outside the west elevation of the house: ‘It is very deep, approximately 17 metres down from ground level to the water. We plan to reinstate it later this summer and get the water tested, to see if it’s still OK to drink!’. The couple were able to transform the ‘Hut’ in the garden (originally built to house the grown up sons of the family when they returned to the Forest House after WWII) into an extra bedroom, perfect for the summer months. 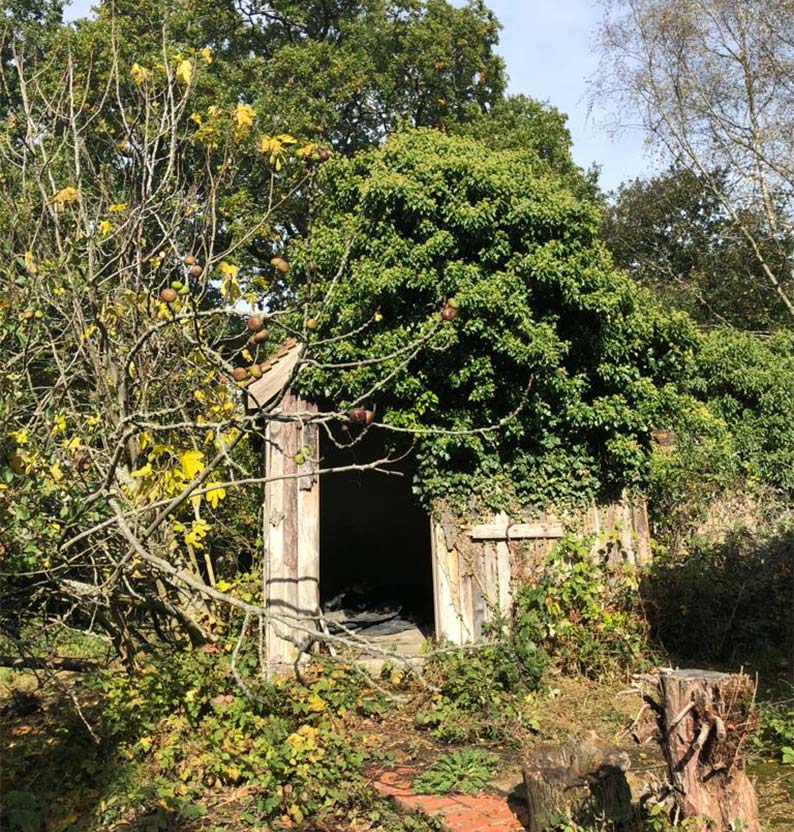 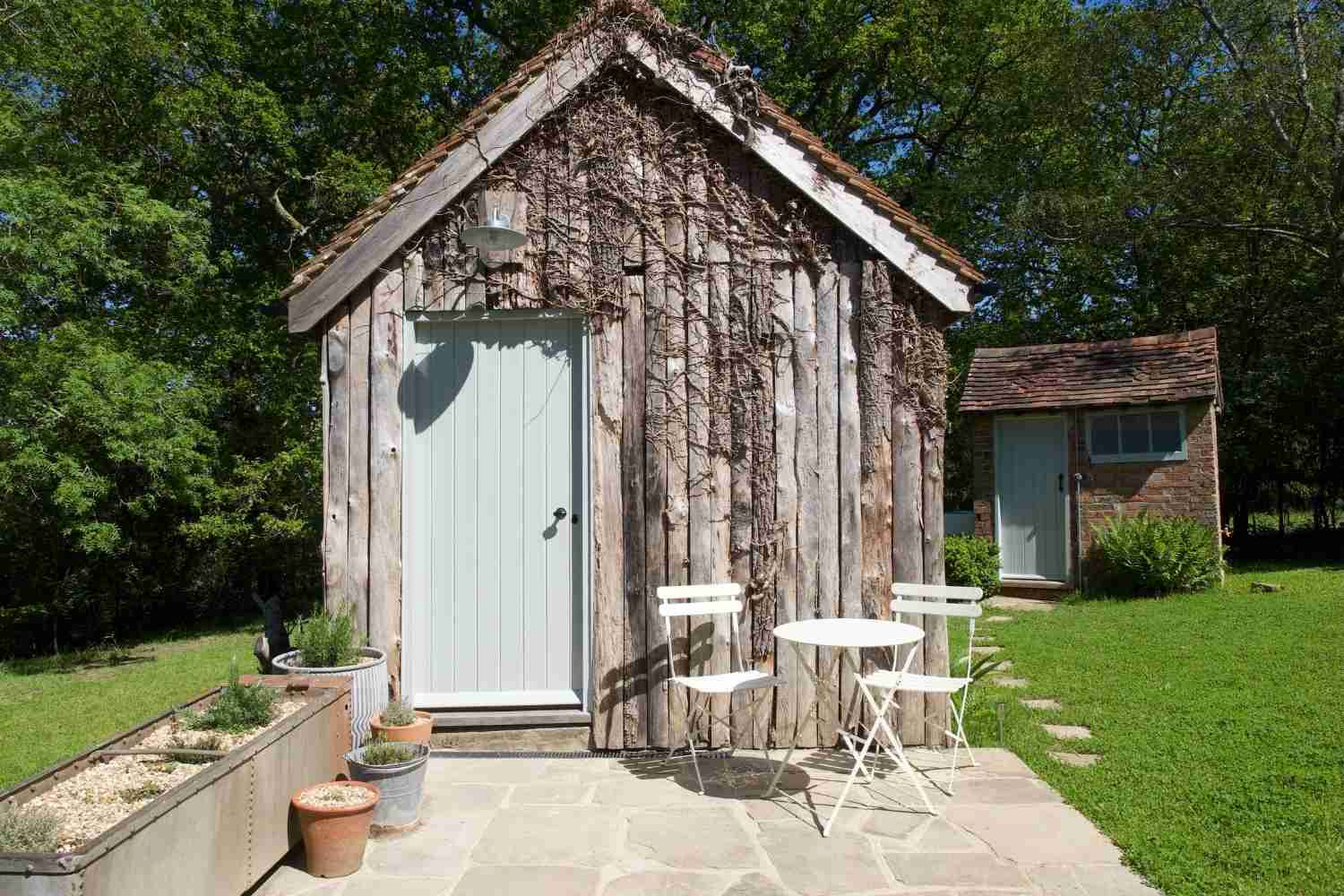 At the end of their two-year labour of love, the Forest House is now available as a Sussex home from home for groups of family and friends, who love the generous communal spaces, brilliantly equipped kitchen (Phiz loves to cook, so was keen to add a top of the range cooker, and great quality pots and pans), and the feeling of being so close to nature. The house blends quietly into the surrounding ancient woodland, and it’s common to see groups of deer grazing in the garden. Guests often comment on the fairytale quality of the house, which Effie & Phiz have clearly managed to keep, while bringing it up to date.

Stay here, and you might even be lucky enough to spot the white fallow buck that has lived nearby for nearly two years; it doesn’t get much more fairytale than that! 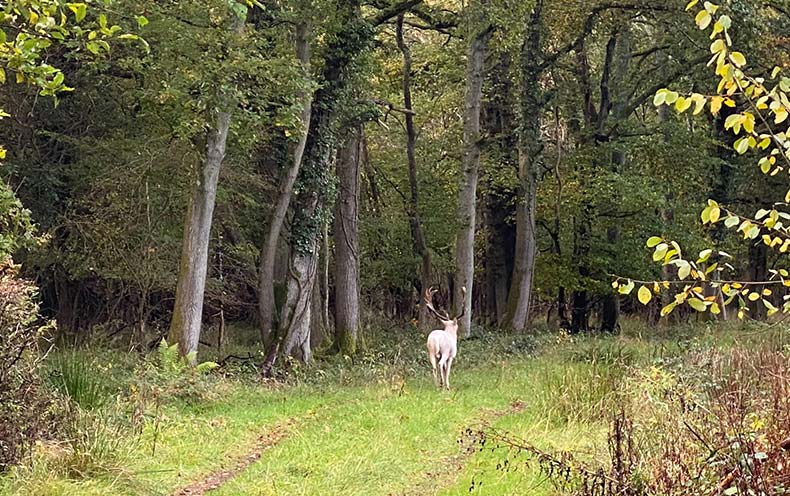 Effie Gibson is an artist and ceramicist whose work is available at Effie Gibson Ceramics.
Here she tells us more about her inspiration for the Forest House. 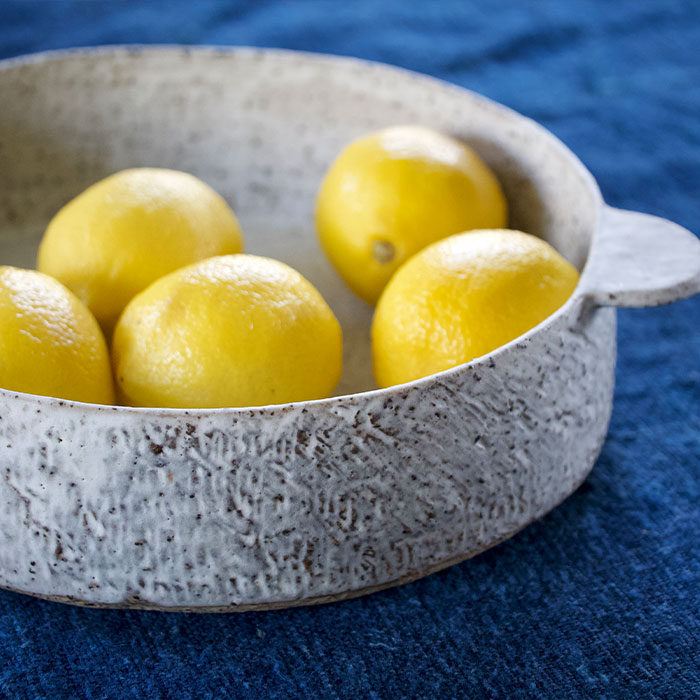 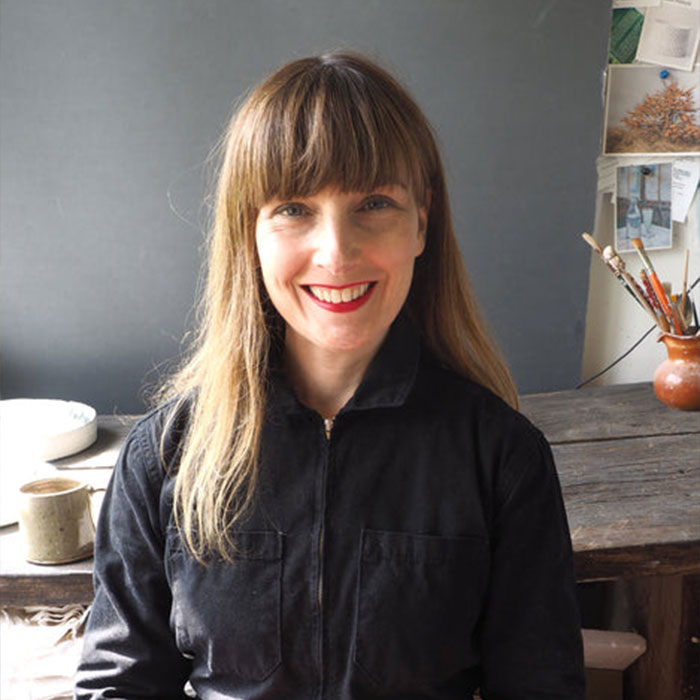 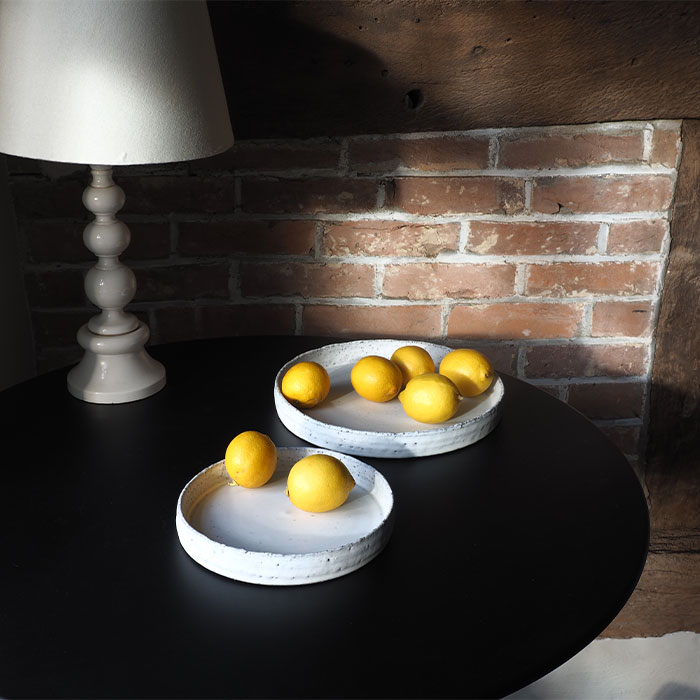 How would you define your interiors style?

Throughout our renovation of the Forest House, we have focused on enhancing the character of the property – to keep it simple and thus let it speak for itself.  In the main we kept to muted, off white walls and embraced the quirky nature of the beams and uneven floorboards.

When it comes to furniture and styling, the main interiors inspiration comes from Merci, my favourite shop in Paris. They sell a mixture of antique and vintage finds which they combine in their showroom with more contemporary pieces. Merci has a beautiful range of coloured bed linens which have been the inspiration for the linen cushions and bed covers. The kitchen is influenced by the scrubbed wood and eclectic vintage finds on display at Baileys Home Store near Ross on Wye. I also love the pared back and simple aesthetic of the of the Kettles Yard house and gallery in Cambridge.

Instagram has also been a great resource of inspiration, especially during the pandemic. @thefuturekept sometimes stock my ceramics and have an online homewares shop. @princeletdrift, is an antiques dealer with two beautiful location houses, and @blackshorestyle is one of my favourite interior stylists. 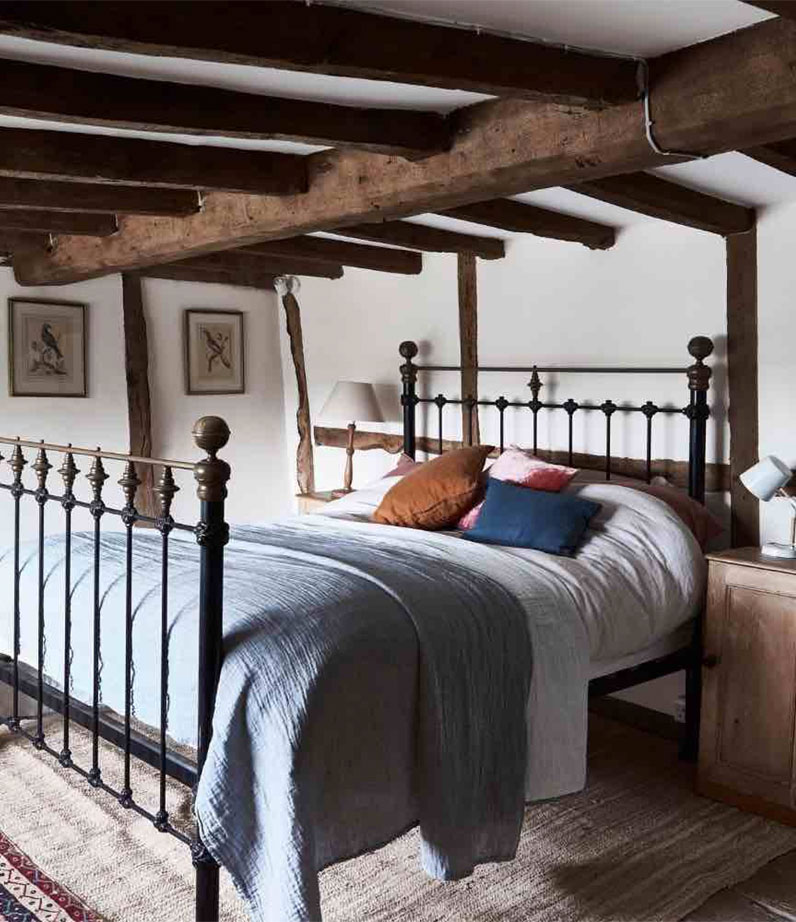 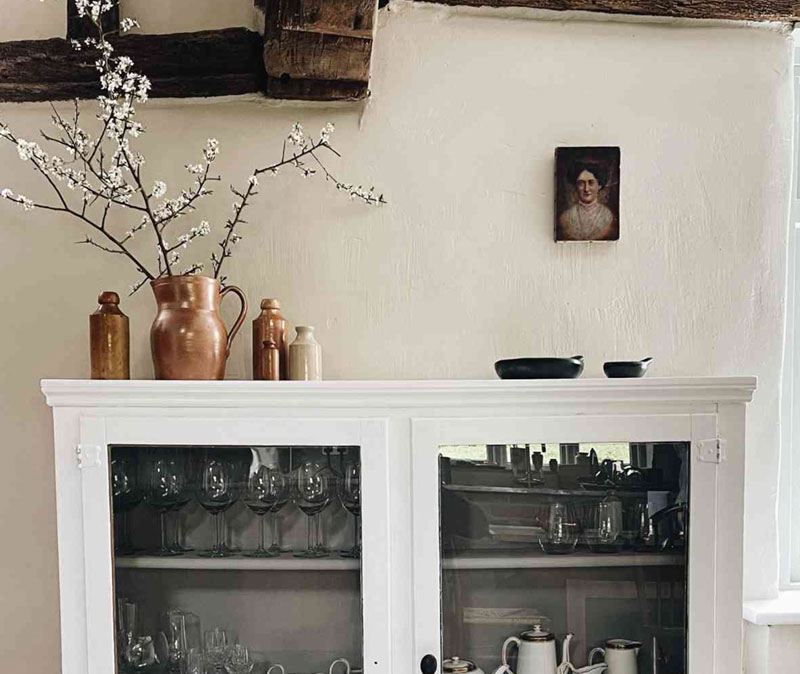 Where did you source all of your furniture and accessories for the Forest House?

I love going treasure hunting at antique shops / fairs and charity shops. I like things that have a history and belong to a different time and place. I like to imagine who used to own them and find out why they were made, and by whom. I like the fact that you never know quite what you will find when you set off.

Many of the pieces were bought at Ardingly Antiques Fair, which is only a 5 mins drive from the house. But I also used Facebook Marketplace and Gumtree for some of the vintage finds including the pine dresser that we used for the kitchen cupboards.

I bought many items like the curtains from La Redoute, and the big velvet bed in the master bedroom came from Made.com.

What are your favourite things to do and see around the Forest House?

It is a great place to be if you like walking. There are walks straight from the doorstep but you also have Ashdown Forest nearby and good walks around the Ouse valley viaduct and Ardingly reservoir. There are some fantastic places to eat and plenty of good pubs nearby. Our favourite is The Cat in West Hoathly.

Wakehurst Place is a 5 minute drive away. It’s a botanic garden, home to the UK’s largest conservation project, the Millennium Seed Bank and an Elizabethan Mansion.

My favourite spa is at Ockenden Manor, only 10 mins drive. It has a fantastic restaurant too.

The famous Knepp rewilding project is only 30 mins drive away, plus there are several National Trust houses and gardens nearby such as Sheffield Park, Nymans, Standen House, Borde Hill.

The Forest House sleeps up to 10 guests, and has a minimum stay of three nights.